James Buchanan, of Viking Training System, shares why he founded his gym on Viking culture and what other owners can learn from this style and community.

James Buchanan, of Viking Training System, shares why he founded his gym on Viking culture and what other owners can learn from this style and community.

When it came to figuring out what would make his gym stand out, especially with the desire to retire the already popular CrossFit-style workouts he originally focused on, James Buchanan went back to his roots. Taking his Scottish heritage and interest in Viking and Nordic culture, James brought the Viking Training System to life in his facility in 2018.

While the traditional Viking style of training dates back to 793ad, James is a pioneer in bringing the elements, philosophies, and techniques to modern-day exercise.

James sat down with us to share the importance and value of Viking training, including its focus and emphasis on life skills. He also shared the main differences between his gym and CrossFit gyms, and what new members can expect when embracing the Viking training system and lifestyle. Keep reading to hear his story and learn more.

I've been in and around fitness since I was a little kid. I first ran a gym in my twenties before commercial gyms were popular. My first gym was on Brighton Seafront and at the time I was training full time doing triathlons. After moving abroad to teach English and returning I went back to health and fitness and launched Viking Training System.

The inspiration behind Viking Training System

I began doing CrossFit, our gym was originally CrossFit Edinburgh, but I wanted to change the theme of the gym to something that interested me. I've been interested in history since I was a really little kid. I've got hundreds of books on Vikings here. It's my heritage. My family descended from a kindred from the Western Isles of Scotland.

I started looking into more aspects of how Vikings trained and how people of that era trained. The spartan gym was a popular theme, but culturally it has nothing to do with me, and people don't understand the culture that was involved with the Spartans and the slave population and the practice of killing so I didn't want to base it on that or the style of bodybuilding.

I wanted to do something themed around my interests with people with admirable qualities. In Norse culture, equality between the sexes was very strong. It wasn't a culture with an established hierarchy to start with. It was a culture where if people wanted to make something of themselves they went out there and did it. Physical labour and fighting were inherent parts of what they did so I wanted to bring these elements into it.

I'm a Glima coach, which is a Norwegian and Icelandic style of folk wrestling. There are only about 15 coaches of Glima in the UK, and within Glima there is also Draga. A lot of what you see in yoga in the UK and Europe involves a lot of callisthenics, strength and breathing exercises that originate from Draga in the Danish, Norwegian, Swedish and Icelandic cultures.

First I changed the name, but rather than just giving a new name to it, once I did the coaching for Glima, I started to look at more evidence for exercise from these eras and the exercise that the Vikings did, and I started to piece together something that was more authentic and representative of the name.

The contemporary stories and the sagas give you ideas of how they trained, and if you look at strength competitions today, many of the people come from the Nordic countries, Iceland, Estonia, Sweden, Norway, and so on. I brought all of these ideas and key elements of fitness that they used together. I've tried to take the general approach to fitness and make it much more encompassing. We use the different club bells and mace bells and melees to replicate the types of movements. The areas of fitness we're looking at are similar to that of CrossFit, agility, power, strength, and endurance.

The thing that the Norse people admired most was agility, and being agile, especially in the context of fighting was very important, even more so than strength. Being able to move fast and have different ranges of motion. In the sagas, there are stories of Grettir the Strong where he could jump his own height forwards and backwards in full battle dress, which could be about 15 to 20 kilograms of armour and shield. We replicate skiing and swimming movements too.

Any country that has been visited by the Vikings has a history of heavy stone-throwing and lifting. Pure strength was obviously a very important element in Iceland. In Iceland, even in recent years, they have these three heavy stones that to get into the fishing crews, you have to lift at least the lightest of the three stones which are at least 140 kilograms. The heaviest is 240 kilograms.

All across Scotland, there are heavy lifting stones which are used for strength practice. Lifting was an element of their training because you see this evidence of lifting within Nordic societies and Celtic societies.

There's a story about one Viking Jarl who could handstand walk all the way around the tables in the mead hall. It's obviously something that was practised. These feats of balance are important in Draga which means to pull, to balance.

They would have to row when there was no wind up the North Sea and rivers. They used to have single-scull boats where they would race one another which you can imagine the type of balance that that requires, also when walking across the ships with moving oars.

To practice for war they used to train with weapons, which were heavier than the weapons that they used in the actual war to get stronger. We don't do any fighting in the regular gym sessions though.

We're part of a company called Grimfrost which makes Viking products in Sweden, and offer sword fighting but it's not part of our normal gym practice, I just do it with a few people. The Grimfrost Hird is a worldwide Viking combat organisation.

Glima is a style of wrestling where the winner is the one who can get up off the floor after a throw the quickest. Going down and getting back up on your front or on your back. It's basically a burpee, so we do it in slightly different positions to replicate the moves in conditioning sessions.

Climbing over objects was another important element, so I have a gymnastics horse so we practice jumping over and carrying things over the box. If you think about the context of a Viking raid and rowing for a long distance, quickly jumping out of the boat, grabbing stuff, fighting people, carrying it back, carrying it over things, back into the boat and rowing away again fast. 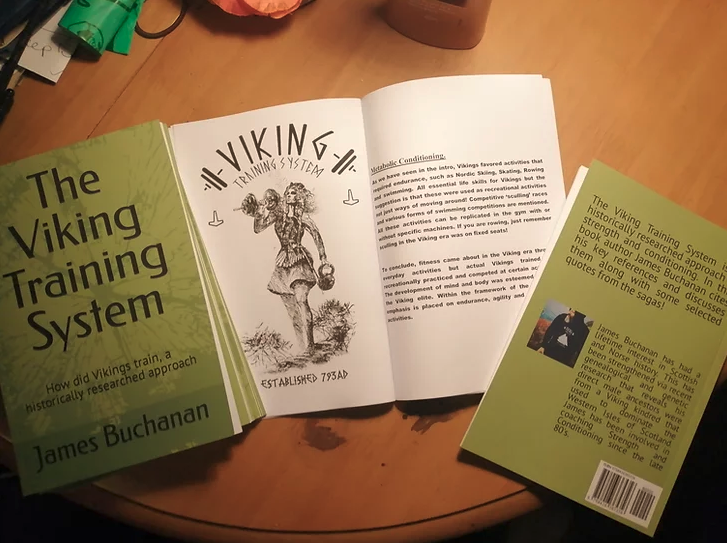 While the gym started out as CrossFit Edinburgh, in Edinburgh and the Lothians regions, I found that my concept of what CrossFit was and for the people coming to the gym was slightly different and I didn't like the passive-aggressive element that was there.

People were training and coming and comparing scores and I didn't like the element that everything had to be fast and timed. I like esoteric movement and putting these in workouts and that was not part of the CrossFit method at the time. I don't think CrossFit is limited, in fact, the last time I looked at CrossFit, they were doing things that were quite similar to what we do in the core exercises and they have never done them before.

But I think people who go to CrossFit expect a competitive environment and we did that for four or five years which was fine, but I don't think it's very inclusive. It works for the people who are at the top level, but the other people are left behind, not everyone does an Rx and people who don't do an Rx are trying to catch up and get these hard skills down without having the background in it. Which often leads to injuries.

Creating sessions to bring the Viking fitness elements together

At our gym, three days a week we do the Viking training system that incorporates those elements, and two days a week we do personalised training. People will come in and if they want to work on their strength or if they feel they want to lose weight or that they’re not very mobile, I give them specific exercises to do

Communicating the value of the Viking training system

I explain to people what we're doing because some people are interested in it, but also within the context of it's just a normal gym. Sometimes people aren’t interested in it and just want to get fit. But I always try to explain to people why the elements are important and why we do things the way we do, and if they don't get it for example, if people say “I don't want to fight,” I change the context and present it in a way they understand. Life skills.

For example, if you're in a cinema and it catches fire and everyone runs to the exit and you get pushed over, you don't want to hit your head so you need to be able to get back up as quickly as possible. We talk about their interests in particular sports and the skills they need for those. The principles of these movements all go back to skills you need in life at any age.

Creating a community built on the tenants of the Viking culture

Our environment is not about competition, it's about making yourself better. There are tenants we follow written on the wall. Integrity, honesty, and supporting each other. These are the tenants that most people had within their society and their law system.

Recently we have had more people come in because of the Viking aspect. I still get a lot of people that inquire about CrossFit, and if they're looking for true CrossFit I recommend them to another place because they will want that competitive atmosphere.

For everyone who inquires I give them a questionnaire and ask them:

Because it's such small groups now, it’s really important to me to have the right people in here to create the right type of environment. It's less important for me to have lots of clients, and more important to have people who integrate well with each other.

Thank you very much James for sharing your story with us. Viking Training System was recently featured in Men's Fitness Magazine UK which includes the exact workouts James uses in his gym to replicate the Viking movements and training. You can read the full article here to put your Viking skills and strength to the test, and check out Viking Training System on Instagram to keep up with the latest at their gym.